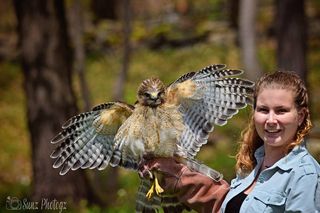 We were thrilled to hear that 'Red', the hawk that had been discovered in distress by Pels in Bridgewater, has recovered and been released back into the wild! 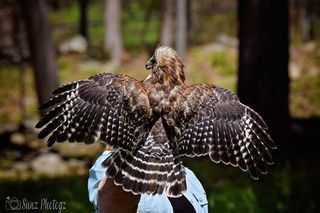 Two weeks ago, our friend Kathy Root had helped us coral him as he could not fly and desperately needed medical assistance. He was eventually transferred to the Audubon Sharon Facility in Sharon, CT. Here is an update given to us by Kathy about Red's recovery:

"He is actually a red- shouldered hawk (not a red-tailed hawk). He had a smallfracture on his humerus but didn't require surgery. He was on pain meds for afew days and then became very "feisty" as the Sharon Audubon rehab coordinator, Erin, put it. She put him into the flying cage so he could spread his wings, but
then he didn 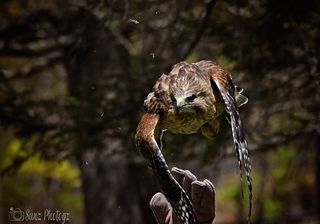 't move around very much. Erin became worried about him, so shebrought him indoors again. After a few more days, he became feisty andenergetic and then she put him back in the flying area. It quickly becameevident to her that he was ready. Red was released back into the wild on Tuesday!"