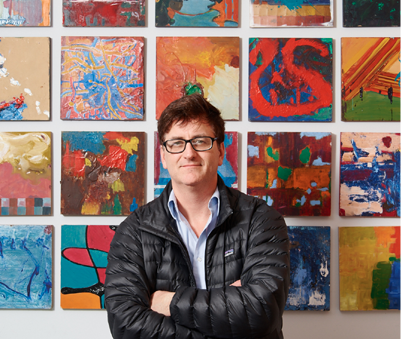 Brendan O'Connell, whose work is currently being shown in our Washington Depot office, has recently finished a spectacular art installation at Emory University. You can view the time lapse of this project by clicking on the link here. 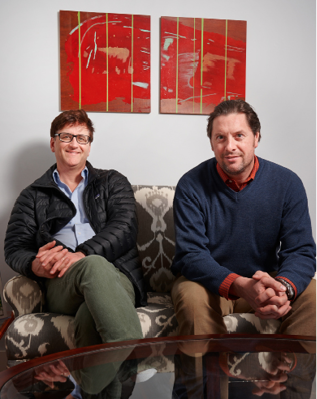 Brendan and Pels have a common connection as mentioned by the artist, "Pels and I both have coincidental history with Tucker, GA, where I grew up... His Grandfather had the famous roadside dive Matthews' cafeteria." 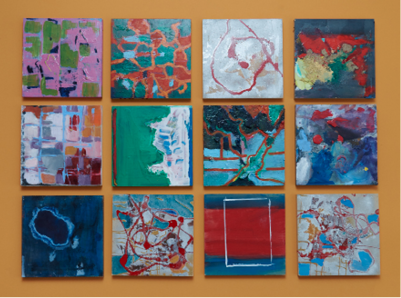 The abstract work that graces the walls of the Matthews Group office evokes emotions with a combination of bold palettes and strong composition. These collections look impressive singly or in groups as featured above. It is an amazing opportunity to purchase paintings by this truly talented Ameican artist. Stop by the office during our open hours from 9 am to 5 pm or call 860-868-0511 for more information.

Brendan O’Connell is best known for his paintings of iconic brands and the aisles of Walmart. O’Connell infuses these modern day environments with a magical quality that transforms both shoppers and products into art. His artistic interpretation of the superstore had some in the media crowning him the “Warhol of Walmart’. Though the concept and subject matter is similar, Warhol put a literal focus on the brand as is seen in print advertisements. O’Connell, on the other hand, infuses his paintings with human warmth paying tribute to everyman and daily life. 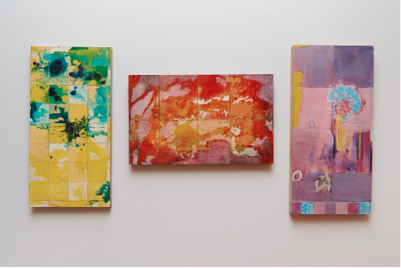 Brendan O'Connell has been featured in the New Yorker, Time Magazine, The Boston Globe as well as his work being reviewed in Art in America. Brendan also appeared on the quintessential Pop American show, Comedy Central’s, ‘The Colbert Report’. O’Connell’s work is collected by celebrities such as Alec Baldwin and Darrell Crate, the former chairman of the Massachusetts Republican Party and in 2012 he was honored with a Rubin Foundation Award.